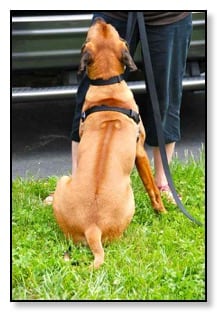 The Rhodesian Ridgeback is a native of South Africa. The breed’s long history dates back to early in the 16th century when the first European men explored the interior on the Cape of Good Hope and found with the Hottentot tribes a domesticated dog with the hair on his spine being turned forward. This is the condition which we now refer to as the “ridge.” The only other known dog which has the peculiarity of such a ridge is found on the island of Phu Quoc in the Gulf of Siam. It has never been definitely determined whether the peculiarity of this ridge originated in South Africa or on the island of Phu Quoc, but the evidence available seems to indicate that it originated in South Africa and that specimens of dogs with ridges were transported from South Africa to the island of Phu Quoc.

It is not known where the Hottentots first obtained these dogs. It is common knowledge that the Hottentot had pronounced Asiatic features and that his ancestors probably hailed from the East. If this is so, it may be assumed that the ridged dog accompanied him on his peregrination until he finally reached Africa.

Hunter, Guard and Companion
The foundation stock of the Rhodesian Ridgeback was developed by the first European settlers in South Africa to fill their specific needs for a serviceable hunting dog in the wilds. The Dutch, Germans and Huguenots who migrated to South Africa in the 16th and 17th centuries brought with them Danes, Mastiffs, Greyhounds, Salukis, Bloodhounds and other breeds. However, for more than 100 years from 1707, European immigration was closed; consequently, the importation of additional dogs of these or other breeds was not possible. Good hunting dogs, therefore, became hard to come by and their value was high. The settlers needed a dog that could flush a few partridge, pull down a wounded stag, or guard the farm from marauding animals and prowlers at night. They also needed a dog that could withstand the rigors of the African bush, hold up under drastic changes in temperature, from the heat of the day to nights below freezing, and go a full 24 hours or more without water if need be. They required a short-haired dog that would not be eaten alive by ticks. In addition, the settler needed a companion that would stay by him while he slept in the bush and that would be devoted to his wife and children. Out of necessity, therefore, these settlers developed, by selective breeding between dogs which they had brought with them from home countries and the half-wild ridged dog of the Hottentot tribes, a distinct breed of the African veldt, which has come to be known as the Rhodesian Ridgeback. The Hottentot dogs played the most important part in the development and ultimate characteristics of the new breed. Throughout all of the interbreeding and crossbreeding between these native dogs and those of the settlers, the ridge of the Hottentot dog was respected and retained. In due course, the Hottentot dog established the foundation stock of our present day Rhodesian Ridgeback.

There is no doubt the Rhodesians (now people of the country known as Zimbabwe) have developed the breed as we know it today from the original stock. In the year 1875, the intrepid missionary, Rev. Charles Helm, undertook a journey from his home in Swellendam in the Cape Province of South Africa to Rhodesia. He was accompanied by two of these dogs. While the Rev. Helm was in Rhodesia (Zimbabwe) Cornelius von Rooyen, the big-game hunter and early authority on the South African wildlife, borrowed the two dogs to take along on a hunt. Von Rooyen soon concluded that they possessed excellent instinctive hunting qualities and thereupon pioneered the breeding of a pack of the species as hunters of big game for his own use. They have since been bred on an extensive scale in Rhodesia and were given the name of that country.

In 1922 the first Ridgeback Club was founded at a show in Bulawayo, Southern Rhodesia, and a standard of points for the breed was set, which differs little from the prevailing standard today. In 1924 the Ridgeback was also recognized by the South African Kennel Union as a distinct breed and the organization recognized its first registered dog. Only two dogs were registered with the SAKU in that year, followed by four in 1925, and not less than eleven in 1926. Today, the Rhodesian Ridgeback is one of the most popular dogs in South Africa.

Breed Recognized by AKC
It is not known definitely when the Rhodesian Ridgeback was first brought into the United States. A few were imported prior to 1940, possibly as early as 1912. However, after World War II (between 1946 and 1955 — when the breed was recognized by AKC), quite a large number of Rhodesian Ridgebacks were imported, not only into the United States, but also into England and Canada.
Their hunting characteristics have also proved to be useful in hunting native game in other parts of the world. Intelligent and ever alert, their heads are held high with pride and, with a set of feet that will carry them over any sort of country, they are the only breed of dog in the world that can keep a lion at bay for the hunter to kill….and live! The Rhodesian Ridgeback has also been used very successfully for hunting bobcat, mountain lion, bear, coyote, deer, wild boar and raccoon in the United States, Canada and Mexico. There have also been reports of Rhodesian Ridgebacks having been trained to point upland game and retrieve game and fowl.