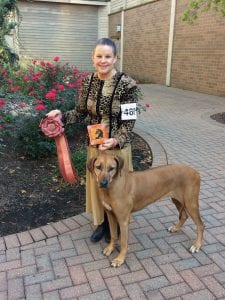 My name is Pat Wieland and I live in Thomasville , PA.  I attended Virginia Tech University and obtained a BS in Animal Science which I was able to use after college in a research capacity . I am married and have 2 grown adult children,one boy and girl. My daughter was married this past Fall (2019) and lives in California. My son lives in Pa close by so he is my dog watcher which he loves since he can’t have pets in his apartment. My first introduction to the Rhodesian Ridgeback was back in the 1990’s. I have been owned by a Ridgeback ever since. I have been successful in the conformation ring and on the Lure Coursing Field with all my dogs. I have bred a few litters over the years and have also shared my household with Golden Retrievers and Smooth Fox Terriers. Besides CBARRC, I am a member of RRCUS, Tortoise & Hare Lure Coursing Club, Mason Dixon Lure Coursing Club, Upper Chesapeake Bay Saluki Club, and Golden Retriever Club of US. I am active in my church and have sung with the Adult choir now for over 20yrs. My husband and I love the beach and spend each summer at our family home in Eastham, Cape Cod with the Golden Retrievers. Some Ridgebacks have been there too . I am retired from being a customer service representative for a box company but continue educating myself having completed the Project Management Course curriculum at Penn State ,York Campus recently. I love to learn new things and consider every club , activity, event, or social gathering a great opportunity to broaden my horizons. I was the interim Secretary for CBARRC when Bonnie Louden resigned and I look forward to being more involved as the Vice President. 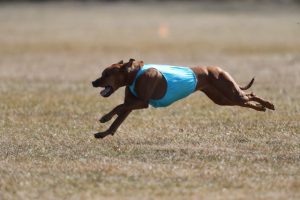 Having owned and loved Ridgebacks since 1982, I am delighted to be a part of the CBARRC Board and to volunteer for Rhodesian Ridgeback Rescue. Having just retired from education administration at Johns Hopkins University, I now have time to give back to this incredible breed. We started lure coursing in 2007 after recognizing that our dear Ridgie desperately needed a job, and we fell in love with the sport. We live on the Eastern Shore of Maryland, andwhen not on the lure coursing field, our girl is chasing real bunnies through our property. 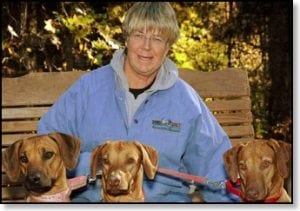 I became acquainted with Ridgebacks when I lived in Southern California in the mid-70s. My neighbors had two bitches, Simba and Rhoda, mother and daughter. They were both large and impressive, well above the male standard for height and weight. After meeting these impressive girls and wanting a dog like them, I found Kari from a newspaper ad in 1974. She was registered as Kariba of Kajun Kreek. The only criteria I knew to look for was not a lot of white. She came from a back yard breeder. She had flying ears, an undershot jaw, was 22 inches tall and had hip dysplasia. Kari had a wonderful temperament and easily flew through obedience training although I never exhibited her in competition.

In 1976 when Kari was 2 years old, I moved to Western Pennsylvania and Tuffi came into my
life, future Ch. Rolling’s Tufani. Tuffi was the first dog I showed in conformation. We learned the
ropes together and he finished owner handled at 13 months. Two years later I purchased a
bitch from Ida Poore in Ohio that had the same sire as Tuffi. He was Rafiki, now very well known
in the breed. This little bitch was called Rose, future Ch. Kimbida’s Crackling Rose, ROM, dam of
13 champions.

At that point, knowing that Ridgebacks would be in my future, I created the prefix Turoka which
was used when naming future litters to identify them. Turoka is a homemade word taking the
first two letters from my first three dogs, hence TU (Tuffi) RO (Rose) KA (Kari). Over the last 48
years I have been involved extensively with the national club, RRCUS, serving four two-year
terms as corresponding secretary, serving on several committees over time and assisting with
rescue. I served from 2008 thru 2020 on the board of Ridgeback Trust, Inc. (RTI), an all volunteer
group dedicated to saving Rhodesian Ridgebacks from the chains of indiscriminate breeding.

My most recent Ridgebacks were mostly involved in the sport of lure coursing. In 2012 they
were introduced to straight racing and did well with that after learning to wear the muzzle.
My current single resident is Mardi 10 years old. We frequently have foster dogs and boarding
regulars to keep life interesting.

Since 2017 my focus has been on rescue and I serve as state coordinator for Rhodesian
Ridgeback Rescue, Inc. National Capital Region covering Maryland, Virginia, West Virginia. I also
cover Pennsylvania for the Mid-Atlantic Region.

CBARRC has been a part of my life since its inception in the 90s when we held fund raiser get-
togethers at Congressional Cemetery for Ridgeback rescue and to let our dogs meet, greet and
have fun. I have served previously as secretary and president. 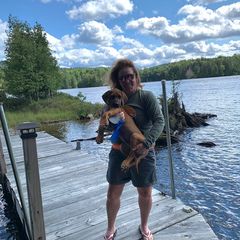 Brooke Davies joined the CBARRC Board in 2017, having owned ridgebacks since the early 2000s. I was first introduced to the breed in the 1990s through a friend and immediately fell in love with the dog’s combination of athleticism, loyalty, and love of sleeping on couches (or anywhere). I currently have three ridgebacks – Zephyr (DC Mahaba’s Monkey Business, SC, ET, TDI, CGC), Celeste (Keniba’s Celestial Queen, ET), and Tugger (Springridge Supermoon’s Till It Shines). I discovered CBARRC through Bonnie Louden’s welcoming attitude while getting involved in lure coursing with Zephyr several years ago and am pleased to now be able to serve the organization and its members through the Board.

Outside of CBARRC, I’m a partner in a van conversion business (Road Dog Vans) focused on designing and converting vans for dog owners. Prior to launching Road Dog Vans, I worked for approximately 20 years as an executive and lawyer in the consulting and emergency management industry. Finally, for approximately 20 years, I served in various board positions, including President, and as a volunteer master firefighter/emergency medical technician for a metropolitan Washington, D.C. fire/rescue department.

Corey Turner has been involved in the breed since 2004.  She became interested in lure coursing in 2005 and began competing with her first dog.  In 2007 she acquired her first show prospect.  Corey has competed and put titles on dogs for lure coursing, conformation, rally, hunting instinct, herding instinct, canine good citizen, and therapy. Corey has also volunteered for rescue and has served on the board of other local kennel clubs.  She resides with her Ridgebacks in eastern Maryland.